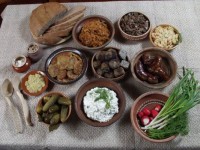 Borsch in Ukraine - a dish of first filing. It is eaten everywhere and always. There are more than thirty varieties of dishes.

Classic Ukrainian borsch prepared as follows. Julienne beets stewed in the lard (or even better - to lard) with salt, sugar, vinegar and tomato paste. Saut onion, carrot and parsley. All this is put in a pan with broth, where for fifteen minutes already cooked potatoes, peppers and spices. Add flour and seasoned mashed before serving with fresh herbs and garlic.

Peasant soup differs in that beet stew on beet kvass. A broth with potatoes boiled cabbage and even add cooked beans.

Volyn borsch generally prepared without stewed beets. It is brewed with the rest of vegetables, including tomatoes.

Poltava borsch is prepared as well as Ukrainian, not only with meat and a goose or chicken. It is served with dumplings (dumplings of unleavened dough or cottage cheese). Gapushki always do flat. For the manufacture of the rolled dough sheet cut in small diamonds, boil them in salted water or broth. Served with broth in which they are cooked, or simply flooded with sour cream.

Dumplings, or rather knydlyami, Ukraine called dumplings from potato dough with plum stuffing instead. 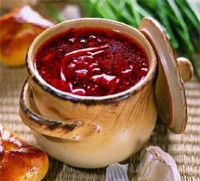 Ukrainian dumplings in appearance very similar to Russian dumplings, but they are large. Most often cooked dumplings with cottage cheese, cherry or boiled meat.

In Ukraine, in large quantities eat sour cream, white bread, pastry and&# 8230; lard. A piece of salted or smoked bacon with a chunk of bread and garlic - favorite food Ukrainian. With bacon, in lard or bacon are cooked with almost everything. On the feast of cooked roast suckling pig. It is served with horseradish and a lot of fiery red pepper.

And in Ukraine willing to use all sorts of dishes from the giblets. For example, borage - soup with pickles, fresh green salad or spinach, root vegetables and pork heart. And yushku in Myslovsky - soup of chicken giblets. And potato cakes - fried in butter cakes made from potato dough with a filling of liver.