Barbecue on the side

recipes → Different → Barbecue on the side 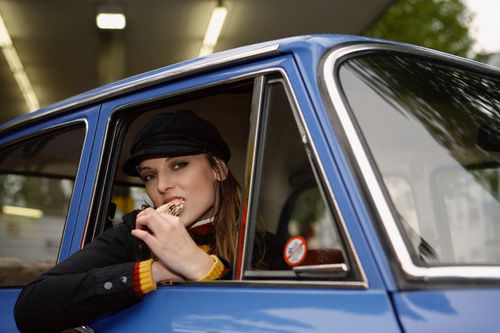 Anyone from drivers going at least once in life in a distant way, do not know the feeling of hunger that arises in the road? The feeling is quite natural...

...and get rid of the annoying "sucking" in the stomach can only satisfy his hunger. Here you will not help you nor the self ("I don't want to eat!"), or trying not to think about food". The organism is alive, it requires, and persistent this requirement must be fulfilled. Actually, for tightly percusive and the road seems more fun, and the scenery outside the window are seen not so tedious, and the sun shines brighter, and... way easier than on an empty stomach - proven experience. You need to eat. And here will be very useful sandwiches, carefully Packed in made wife, or my mother's pies in Stockach, and maybe a whole chicken wrapped in foil. The driver opens the trunk, in anticipation of a hearty lunch or dinner, and delight eats hearty, calorie supplies... isn't it beautiful vision that causes white envy? However, today my article is not about those lucky ones who can open the trunk, to satisfy annoying fly buzzing in my stomach hunger. My article about those drivers that are left alone with this feeling unsatisfied. Alone... Until the first roadside cafe, from which doors are dealt fragrance products coming all the way down the track, and which is the best advertising such institutions...

Actually, the smell causing excessive salivation at the hungry drivers, is an integral part of a roadside cafe. And in vain you believe that the aroma that spreads for miles by accident. The grill is set on a hill so that the smell of cooked in the coals of the barbecue, waves breaking on many hundreds of meters, forcing the imagination of passing motorists to draw in the brain, mouth-watering pictures and attracted most of these motorists, which potential clients, under the roof of hosts point catering.

In light of the fact that such institutions are in steady popularity among drivers, would like to disclose some aspects related to the purchase, preparation and implementation of the final product - flavored barbecue. So, buying...

"There is no such crime that will not go capitalist for profit 300%". Karl Marx, before you make such a statement, documented in one of his immortal works, thoroughly studied psychology and business practices in society that are at the stage of primitive accumulation of capital. Because in our country there are still residual effects of this "primitive accumulation", then is it any wonder, what is the situation in the area of catering?

Meat for the preparation of aromatic zavlekalok often sold in nearby villages, and the quality control does not conduct one. Why? The answer is simple - the price. In order to trade the same beef legally required help with sanitation. Help cost money. Place on the market worth the money. The result is a "checked" meat loses in the price of meat "unchecked". It is no secret that the profit from the sale of the finished product, i.e barbecue is in point of roadside catering more than one hundred percent. Money, however, never too much, and unscrupulous dealers go to great lengths in order to increase their income by reducing the cost of purchasing raw materials for making kebabs. To end such a race for profit can be very sad. Unfortunately not for the grief of merchants, and for the consumer.

Most owners of roadside cafes firmly believe in the magical power of fire. In heat treatment, suffering which any product is harmless. In light of this, it will be interesting to see what, for example, vegetative forms of the causative agents of botulism form is extremely resistant to various physical and chemical factors of disputes. Disputes, for example, can withstand boiling for 4-5 hours and the effects of various disinfectants in high concentrations; resistant to UV radiation, freezing and drying; they do not destroy even the 18% solution of table salt… So profit of some costs significant costs on the treatment of others.

Buy belyashi, they are very good!

In your mind there was never a question, when you saw an old woman selling on the roadside tat - what oil these belyashi were fried? The answer I got on the cheap (think Marx!). And how often a woman is changing the oil? Answer - when it ends, and then change. Any owner that has even the smallest idea of cooking, her nose "fragrance" are produced in stationary roadside "kitchen" of the job, will immediately issue a verdict - the old oil. The old, blackened from repeated use. There are cases (and they are not isolated!), after changing the old, foul-smelling oil was poured into the bottle (!), in order to be used the next day. Meat for cooking so popular now tat sold too, of course, not for market price. Why? Indeed, there are numerous natural markets, where on the dusty pavement, in some Newspapers lying down, covered with flies, is available and quite edible meat. Help? And which help in natural markets, like natural disasters occur here and there, on the territory of the towns and villages of Ukraine?

Did you know that the cases of human disease, the symptoms are similar to symptoms of the terrible disease known as "mad cow disease" was observed in the Russian Polesie, just 70 kilometers from the state border of Ukraine?

According to scientists, you should immediately find out how urgent is the problem of prions (protein - disease) for our country. The disease begins with changes in the psyche, then breaks the function of the musculoskeletal system, then progressing to respiratory paralysis. Patients with physical or mental disabilities, paralyzed in Ukraine a lot, especially increased their number in recent years. It is possible, in many cases, fault is this protein? And how many of the patients on the conscience of the manufacturers and sellers so popular among the people of tat? Who knows...

Rat, knife chefs and water in a thermos

A year ago I had to pass cornflowers. At the entrance to this famous city near the market is a cafe. In it for a modest fee, everyone treated meat dishes of Ukrainian cuisine. It was winter. In the caf were several motorists, gaining strength before continuing travel on icy roads. I had lunch and went outside. Suddenly saw something twitched under my car. "Cat," I decided. And made a mistake. It was a rat unrealistic sizes, tucked me under the hood. Probably it won heat failed to cool the engine.

From the cafe, where I just had the honor to eat, there was a cook and went to the car, assuring me that he was going to deal with this Viper". When volunteer poked in the rat with a knife, which a few minutes ago was cutting the bread, I almost lost consciousness. Grey raznoschitsa infection, in the end, gave up and fled in an unknown direction, and the cook wiped his knife on the apron is not the first freshness and wink at me, went back into the caf, where the knives used for cutting products have such a wide range of applications that can hardly think. I was afraid the symptoms of some terrible disease for a week. Fortunately he carried...

We see sometimes things due to instill in us a strong aversion to eating in places where using this food has all chances to be later in a hospital bed. And we have to step on a rake, which can be very painful to hit us for our blindness and carelessness in matters of the most expensive - health. In what conditions are meat pies, extracted from dirty bags of roadside repurchase? What is the quality of water, poured in a thermos aunts uncertain age, selling coffee by the roadside? Where were stored sugar pour aunt in disposable cups dirty spoons? Where it was stored, where purchased these cups? We try not to ponder these questions, hoping to