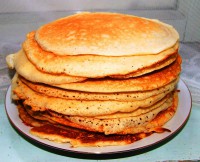 The most important carnival treats - pancakes, cook them in a myriad of, but in addition to that pancakes are delicious, especially with butter and red caviar, and they have ritual significance - symbolize the sun, and the sun is known to the ancients revered as omnipotent the god of light and fertility.

There is a belief that if the taste of pancakes on Shrove Tuesday, make sure you get some of the power of the sun.

In celebration of Shrovetide there are other ritual practices that constitute the essence of the holiday, such as funeral rites associated with the commemoration of the dead. Along with such a sad tradition of arranged bride newlyweds. Well, of course themselves festivities: ice skating with slides, building snow town. Very popular were the construction of the towers in the snow and Simbirsk province of Tula, these are mainly engaged in children, and in the Penza region in this fun consistency were to participate and adults. The game was to build a big snow fort, and then divided into two teams, each group tends to take the fight to the ice palace, and as a result, long being built town was destroyed completely. After a winter fun begins meals together.
But in the Nizhny Novgorod region in the folk were left such information about an interesting custom: local entertainers staged "Pancake train"Consisting of the sled and the center of the "composition" install the oven, and bake pancakes dressed girls on the go, throwing them to the people. Probably from this appeared saying "As for oil pancake week at the ceiling flew.

Another tradition associated with the celebration - a burning effigy of Maslenitsa. This ordinance contains the deeper meaning - Pancake identifies an image of a certain character: winter, death and fertility, and the burning Shrovetide doll symbolizing the destruction of the old world and the new revival of fertile forces.

In every area of our vast country doll Shrovetide had their characteristic differences: for example, in the Tver region it was made of brooms and neighboring Smolensk dolls were made of wooden barrels.
Traditionally, Pancake collected booths and staged fisticuffs.

Rounding pancake week Forgiveness Sunday - is the last Sunday before Lent. On this day all the Orthodox ask forgiveness of each other, in order to proceed to the post with a clear mind and focus on the spiritual life and with an open heart to meet the Easter.