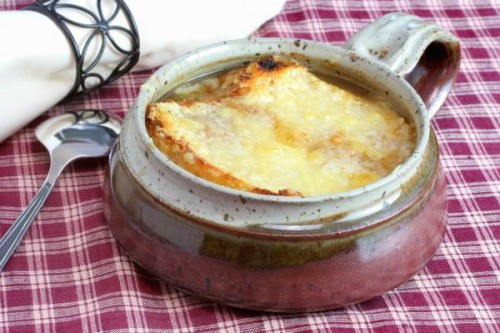 Onion soup - A traditional French cuisine, which is easy to prepare, because it does not require expensive or rare products in our stores.

French onion soup is as popular as we have soup - it is one of the most popular soups. There are two versions of the invention onion soup. According to one onion soup was the dish of the poor, which in ancient times came up with this dish from what was available to them, from the simplest products. A second version is exactly the opposite of the first: it is believed that this soup invented by the king Louis XV on the hunt, when due to an unsuccessful hunt remained without dinner.

Included in the classic onion soup products are simple: onion, broth, flour, butter, cheese and bread. So get to know this dish is considered the hallmark of French cuisine, snap!

It is believed that the onion soup helps to improve health for colds and hangovers. 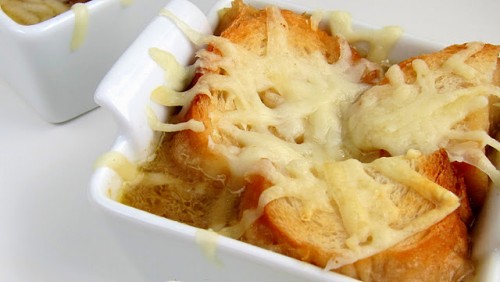 How to cook a classic onion soup. Melt the butter in a frying pan, put sliced thin half rings onion, finely chopped garlic and saut over medium heat for 20 minutes, stirring constantly. Pour the onion and garlic to the sugar and flour, stir and saut another 5 min before browning, add the thyme and mix. Pour the onions to the broth, bring everything to a boil, add salt and pepper and, over low heat, covered then 30-40min. Lubricate sliced baguette slices with olive oil, flushed in the oven. Pour the soup into bowls, put directly on the soup croutons, sprinkle with grated cheese and put in 10-15min in a preheated 180 degree oven.

As can be seen, in the preparation of onion soup is very simple. Today, there are many recipes for it, and to teach classical, you can try to do it in different variations for your taste. Small subtleties and nuances of cooking onion soup refer to videoretsepte to help prepare this dish all the French canons.