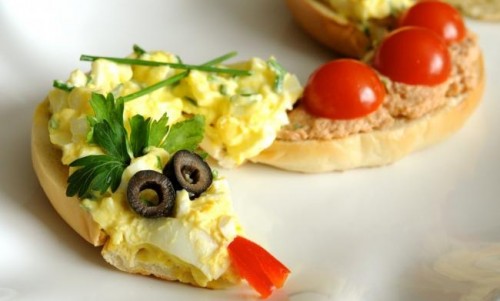 The recipe is simple, but very effective new year snacks-2014, which will perfectly decorate the Christmas table in the year of the Snake.

Half of the baguette slices spread with one filling, half the other, then carefully cut the sandwiches in half lengthwise.

Separately from the bread, cut the head and tail of the relevant forms.

Garnish sandwiches with egg, green onions, folding them on top crosswise, put the sandwiches, so that the curved line is the "snake torso, joints sandwiches to cover halves of cherry tomatoes.

To make snake eyes from olives, cut in half, and the language of sweet red pepper.

Served Christmas snack of sandwiches "Snake" in the cold.