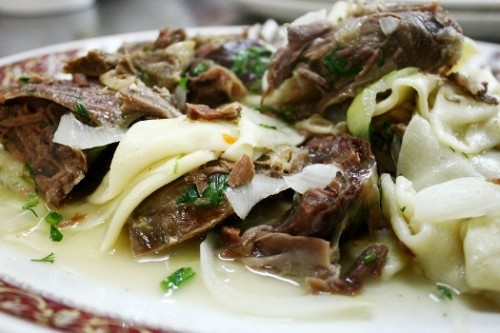 Beshbarmak is one of the very popular in our country dishes, love him and prepare many lovers of Oriental cuisine. Let's see how to cook a delicious beshbarmak, what are the characteristics and subtleties of this dish.

Beshbarmak is not related to the kitchen of any one country, we can say that this is a national Muslim dish as a whole. If to be more exact, beshbarmak was invented by the nomads, which include Tatars, Bashkirs, Kazakhs and other peoples. The name of this dish comes from two Kazakh words: "Besh" five and "Barmak" - finger, that is literally the name means "five fingers". It is due to the fact that the Cutlery for food Oriental peoples of Central Asia have not used, and often not used even today it is one of the features of their food, and takes the dish by hand - and it was called Besh Barmak.

In countries where beshbarmak is very popular, it is being prepared for different holidays, festive table is not considered as such. Serves a large common plate, beautifully spreading the noodles and meat and making greens. Separately applied remaining after cooking meat broth in small bowls.

So what is beshbarmak? In fact, this is a meat main dish, the composition of which contains boiled meat and noodles. Today besbarmak can call and soup and cook it not only from meat and noodles, and potatoes with chicken, and even fish - but all this is, in fact, variations, additions, and we will talk about the preparation of this besbarmak, which does not belong neither to the first nor to the second dish.

Beshbarmak has a special taste, peculiar only to him and to seek his help especially in the technology of its preparation and presentation. To master these nuances can anyone - you only desire, we will tell you about how to prepare beshbarmak by the traditional recipe as much details as possible. 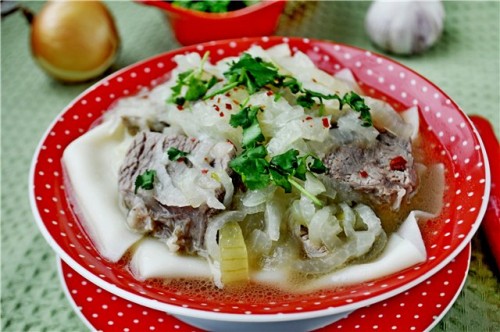 How to cook beshbarmak on the traditional recipe. Rinse the meat, arbitrarily cut into large pieces, put in a pan, pour 4 l of cold water, turn on medium heat, bring to a boil, then make the minimum fire and cook the meat to such an extent that it is very easy to get away from the bone, i.e., 3-4h. An hour before end of cooking meat to put to him peeled carrots and onion, sweet pepper, Laurel, salt. The foam during cooking to remove, and some fat must be periodically removed and set aside - you'll need it.

To make the dough for the noodles: sift the flour, pour half into a bowl, pour the lightly beaten eggs, salt, add cold water or broth, knead dough, gradually mixing pouring the remaining flour. If the dough mix is correct, then the cut will not be air bubbles. Wrap the dough with cling film or a damp towel, leave on for half an hour.

For shaping pieces of dough from the entire test to tear off pieces the size of an Apple (the rest to wrap back to the film or towel to avoid weathered), to roll out a thick floured work surface very finely 1.5-2mm thick, cut each layer into stripes, and the stripes on the diamonds. Sprinkle the finished dough puff diamonds flour thick, so to leave on the table.

The cooked meat to get out of the broth, remove all the vegetables and spices, and sift, and the meat separated from the bones and hands, divide into small and medium-sized pieces on the fibers.

Chop onion rings, half put in a pan with the removed from the broth when cooking meat, fat, and salt until soft and fry. The remaining onion to put in a colander to omit for 1 min in boiling broth. To get the bow out of the broth, dry and well-sprinkle with freshly ground pepper.

In a separate saucepan, pour 4 ladle of broth, add water, salt, bring to boil and throw the diamonds from the dough, boil them until tender - as pasta, to the extent that "al dente", not digesting. Discard the boiled dough in a colander and mix with the fried onions - diamonds should not stick together.

Submission Besh Barmak: take a large flat dish, heat it, put the diamonds of the dough with onions, top lay the meat, put the blanched onions with pepper. Served in individual cups broth (it should be clean, transparent), sprinkle it with the chopped herbs.

What else you need to know about cooking Besh Barmak:

To prepare beshbarmak is quite easy, especially if you are familiar with the test. Bon appetit!

And videoretsept will help to master the dish even better.