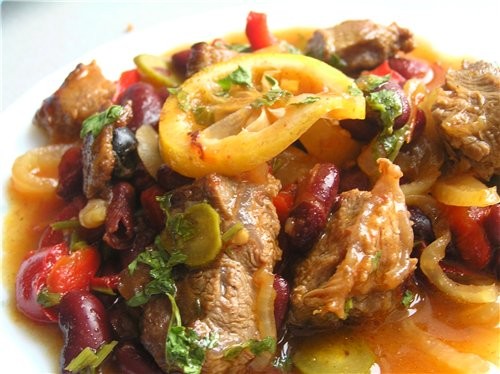 With such a dish as ABC is not familiar with each Russian woman, but one can hardly say that it is alien to us and not popular in our country. It is just the opposite, just for its preparation is not solved any fear of possible difficulties. In this article we will tell you all about how to cook a delicious ABC Tatar, so you can add another meat dish in your favorite recipes.

ABC is a meat dish Tatar cuisine, prepared, in addition to meat, pickles and other vegetables (in ABC may include potatoes, onions, tomatoes, carrots, peppers and other vegetables). As for meat, it can be anything, although the original recipe ABC involves the use of horse meat. Today most commonly ABC cooked beef, lamb or pork.

Traditionally ABC cooked in a cauldron, pot or cast iron, however, quite suitable for cooking and such modern equipment as Kazanka of various alloys, refractory glass Teflon pots and pans. Also ABC can be cooked in clay pots, it is believed that thus prepared, it turns out the most delicious.

For ABC cooking meat and vegetables are roasted, then connect and long enough stew together - so dish reaches a very special texture, tender and very tasty, which I emphasize by adding calcined in a dry pan flour. In General, the technology of preparation of ABC simple, and learn it anyone.

How to cook a classic ABC Tatar: stages 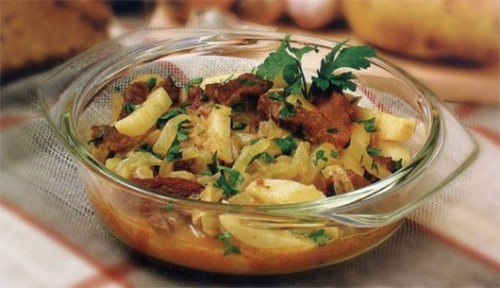 First of all, for making ABC need to choose meat. Here the situation is ambiguous: some believe that it serves any suitable, including hard meat (due to cooking it still softens), others insist that the meat should be tender and always young. What variant to stay - everyone decides for himself, in any case, with the right preparation ABC meat will be very tender. The meat can be taken from the shoulder or leg, though, and then everyone decides for himself. First you need to cut the meat across the grain into thick wedges about 1 cm and a length of 3-4 cm, RUB it with salt, pepper and other spices to taste. Then put in a pan with hot oil and fried until taromenane. Fried meat should continue to simmer on low heat, covered, plugging it with broth or water so that the meat was completely covered with liquid.

If you prepare ABC in the cauldron, first fry in butter a few pieces of carrot, then pull it out and fry the meat - this will prevent it from sticking to the walls of the cauldron.

The second stage of the preparation of ABC is to prepare vegetables. Sweet pepper, carrots, potatoes, onions - all these vegetables before adding to the meat according to the original technology of cooking should fry, but if you want to make more easy to stomach food, can not fry the vegetables. Pickles, always used in ABC, you need to cut strips of other vegetable mix, sliced not too large.

The third stage. Prepared vegetables you want to add to the meat, add all the spices, put the Bay leaf and simmer for another 20-30 minutes together.

Pickles can be added to the meat before the rest of the vegetables at the beginning of its extinction after roasting. In the process of extinguishing the vegetables with the meat, you can add broth or water as needed.

Special stage in the preparation of ABC is to prepare pastry filling. It can be done in different ways: the easiest option is to ignited the flour in a dry pan until creamy and add to the almost completed ABC at the very end of cooking. Another option is calcined flour diluted with the broth in which the stew meat, and added to the meat together with vegetables.

In General meat for ABC must be extinguished at least one hour-one and a half hours.

Thus, in the preparation of delicious meat dish, usually takes less than two hours, and, although there are in preparation azu certain nuances, complex it cannot be called. Well, to your ABC has always turned out well, always remember the following:

We will talk about several recipes for delicious ABC in Tatar. 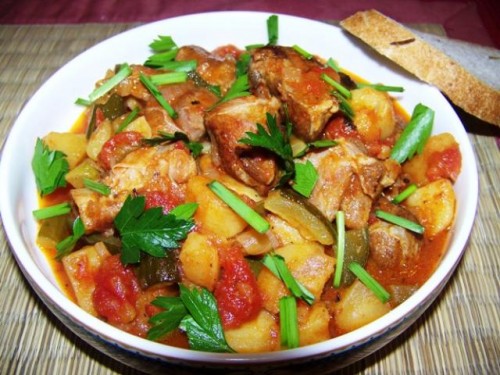 How to cook a classic Tatar ABC. To prepare tomatoes tomato puree, giving them in a meat grinder and Uvarov 2-3 times, passionate tomato puree for a few minutes. Cut into cubes and RUB the meat with pepper and salt, fry until taromenane, pour the tomato puree, mixed with so much water that the meat was completely covered with liquid, cover and simmer on low heat. Flour to dry, dilute a small amount of the broth from the meat. Clean pickles from the skin and cut into strips, onion cut into half rings and passionate. Fry the potatoes, put to it the onion and fry everything for another 10 minutes to Combine all the prepared ingredients with meat, pepper, place Laurel, simmer for another 15 minutes, then add sliced tomatoes and chopped garlic, continue cooking for another 5 minutes When filing refill ABC sour cream and sprinkle with herbs.

How to make ABC in pots. Cubes chop meat, diced onions. Stir in the oil pan with ketchup, salt and water, heat, put the meat, to extinguish and put in pots. For meat to put some finely dice the cucumbers, then cubes sliced potatoes (you can pre-fry), pepper and salt. Pour the contents of the pot with water to the middle, top, drizzle with mayonnaise, sprinkle with herbs and bake in a preheated 180 C oven for one hour.

Tatar cuisine is one of the closest Russian, and Belarusian and Ukrainian, many Tatar national dishes are very taste in our country, and ABC is one of them. Try to cook it and treat men or just anyone who loves meat in your family.