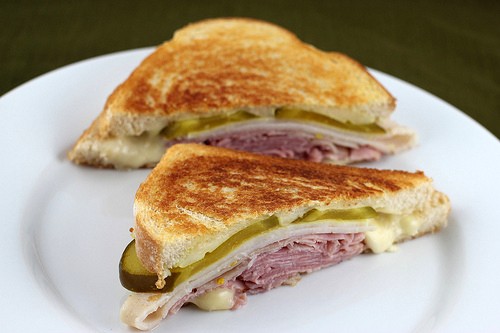 Sandwiches can be prepared with any products, but one of the most popular, however, are sandwiches with ham is a delicious and hearty. In this article, we tell you about the best recipes of these sandwiches.

How to cook a delicious sandwich of ham to tell absolutely no sense - know it all: bread, ham and cheese. We in this collection of mouth-watering sandwiches with ham will tell you about other, less trivial variants, but such simple and favorite foods.

First, for example, a sandwich with ham will be a great option for Breakfast.

The first recipe: Sandwich with ham and scrambled eggs

How to make sandwiches with ham and scrambled eggs. Coat the slices of bread on one side with butter, two of them put a piece of cheese, top with the ham, then a slice of cheese, cover deferred slices of bread, remove the sandwiches in the oven heated to 220 degrees, and bake until taromenane. The remaining melt butter in a frying pan, cook the scrambled eggs two eggs, salt. Put one egg on each sandwich, lifting the top piece of bread, sprinkle with herbs, put back the "cap" of sandwiches and submit them to the table.

The second recipe: Sandwich with ham and apples 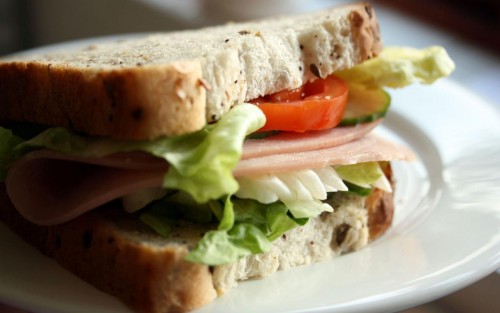 How to make sandwiches with ham and apples. To 190 degrees preheat the oven. Smear half of the bread with mustard, top with thinly sliced cheese, then ham, thin slices of Apple, then again the cheese. Cover with remaining slices of bread, squeeze, outside the bottom and top slices of bread spread with butter, put it on the hot pan and min on each side to brown, then put it in the oven sandwiches for another 5min.

Apple can be replaced with a pear - this fruit ham also goes fine.

You will need: 50g of cheese, 2 slices of ham and bacon, 1 cucumber, ? of processed cheese, white bread for toast.

How to make a sandwich with ham, bacon and cucumber. Coat the slices of bread with cream cheese, put on 2 of them bacon, on top of a thin slice of cucumber, then cheese, then ham, cover with slices of bread on top and serve sandwiches.

You can combine ham sandwiches and other types of meat - this version will appeal to men.

How to make sandwiches with ham, cheese and beef. RUB the meat with vegetable oil, mixed with pepper and salt, place on grill or barbecue grill and cook until tender, let cool slightly, slice finely. Coat the slices of baguette with mustard, put half of them meat, ham, cheese, cucumbers, cover with remaining grease from the outside melted butter, place on the grill or grill on both sides to cook for 2-3min before filing each sandwich cut diagonally in half.

Invent your own recipes for delicious sandwiches with ham and cheer their loved ones!