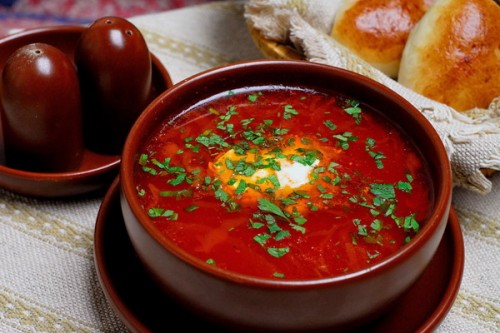 Soup the king of Russian soups. Many families have their own recipe borscht, transmitted from generation to generation, but if such a recipe, everyone loves to cook cook wants to learn how to cook this soup is so close were delighted.

The beauty of soup is that it does not require any specific ingredients and preparing is quite easy, you just need to know the basics of cooking. To learn how to cook delicious soup and everyone can cook, including and not very experienced, just need the desire, and the rest is a matter of practice.

The soup - dish folk cuisine. This food is not a specific author for centuries, its recipe was developed by ordinary people, which has brought her something. So today we have so many of his recipes. However, in General we can define the concept of the classic soup is quite specific: it is red hot soup cooked with meat and vegetables such as beets, onions, carrots, potatoes and cabbage. And vegetables such as bell peppers, tomatoes, zucchini, turnips, and beans, apples, dried fruits are considered as an extra, not the main ingredients.

The classic recipe for borscht 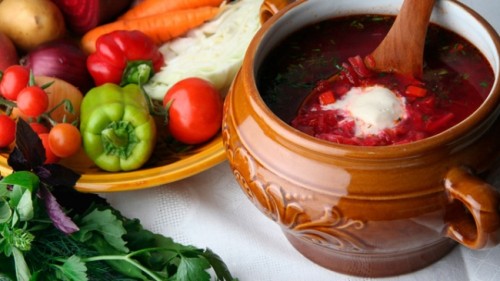 How to cook a classic soup. Meat wash and put into a saucepan, pour 3l of water and cook over medium heat for 1H after boiling, cover with a lid, get the meat, allow to cool slightly. Finely chop the onion, put in a pan with heated oil, 5min to fry, add grated on a coarse grater or finely chopped carrots, cook for another 5 minutes, add grated on a coarse grater or finely chopped beets, cook 3 min, put the tomatoes, chopped or diced tomato paste and juice of half a lemon or 1 tsp. vinegar 9%. Pour in vegetable zazharku one ladle of broth from the pan, put the vegetables, covered 10 minutes. While the meat cools broth shredded cabbage, boil 10 minutes, then put the chopped meat and potatoes, diced 1.5 cm, cook for 10 minutes. Add vegetable zazharku in the soup, cook it for another 5 minutes, add pepper, salt, stir, turn off the heat and let the soup sit for half an hour before serving, wrapping the pan with a blanket or thick towel. Submit the soup, filled with sour cream and sprinkled with fresh herbs.

If vegetable zazharku put canned tomatoes, vinegar or lemon juice can not be added because they already contains vinegar (acidic environment necessary to preserve beets bright colors and, eventually, the beautiful colors of the soup). Often vegetable zazharku also podslashchajut sugar, it makes the taste of the soup as a whole richer.

To cook a delicious classic soup you will also help this video.

Having mastered the classic cooking of soup, you can try to make this soup with any additional ingredients. We also recommend: