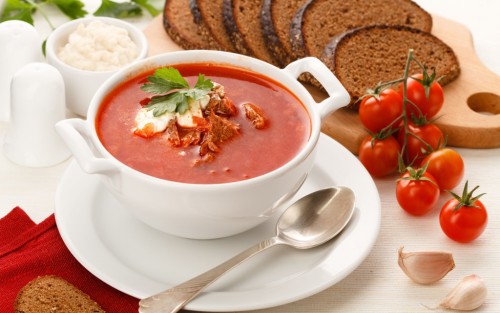 Soup can be prepared with any meat: beef, chicken, pork - either way, it will be delicious! In this article we describe the preparation of borscht with pork, which can also be very different.

Borscht recipes today so much that all do not count - they can be hundreds, maybe thousands! Each chef eventually stops on the method of preparation of this wonderful soup that he and his family prefer. But sooner or later, when from time to time prepare meals in the same way, I want something new, fresh look at familiar dish, new notes of flavor. Therefore, periodically try to cook soup for other recipes also need!

Soup with pork - it's very rich, nourishing, flavorful version of this soup. You can make it with different parts of pork - bacon, bacon, tongue, breast, meat on the bone, etc. Meat may be including smoked. Let's see how you can cook a variety of options borscht with pork.

How to cook soup with pork tongue. Language clean, wash, add water, boil until tender and remove the peel. Cut the tongue cube, strain the resulting broth. Grind the onion, fry until browning it on the fat, add the diced chopped carrots, shredded cabbage into strips, grated beets on a coarse grater, put out. Pour broth language in beef broth, add the sliced tongue, vegetables from the pan steamed, slices of bread, bring to a boil, throw in the soup cubes sliced potatoes, boil over high heat for 10-15min, salt the pepper and remove the soup from the heat before serving to give brew. 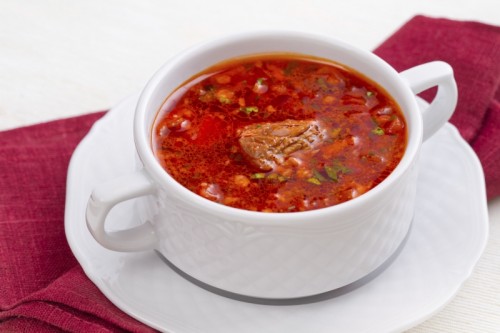 How to cook soup with pork belly. Julienne cut beets, podsolit it, sprinkle with kvass stir. Cut the bacon into pieces of 20g, fry in melted butter, add the beets and onions until browning. Pour the meat with vegetables pre-fried until the smell of walnut flour, stir, put everything in a pot, add water and brew, boil the soup 1,5ch. For 10-15min before the end of cooking fill the soup bitter pepper, laurel, salt the. When serving sprinkle the soup greens.

How to cook soup with smoked bacon. Boil the potatoes until tender, clean. Cook the pork loin in the broth, get it cut and medium-sized. Finely chop the parsley, onions, carrots, saut in butter until soft, then put in boiling broth, add sugar and spices. After 10 minutes to put in the soup pickled beets, cut into cubes, pour the brine beet, bring to a boil and turn off the stove. Give the soup before serving brew 5-15min to file this way: in a bowl put a piece of meat, sour cream, pour the soup and boiled potatoes served separately.

How to cook pork ribs soup on. Pour over ribs 4L cold water, bring to a boil, remove the foam, put pepper peas and laurel, you can also add root - parsley, celery. Cook over low heat broth 1,5ch. Cut the carrots, beets, cabbage, bell pepper, eggplant large strips, and onions and tomatoes - diced. Potatoes cut into cubes. Melt the butter in a frying pan or lard and fry 5min carrots, put the onion, fry 3min, put pepper and tomatoes, cook 5 min, put beets, put on low heat for 10 minutes, season with tomato paste, stir, then still 5min. In stock, taking out ribs, which need to cut to medium-sized pieces, removing the meat from the bones (optional), add the cabbage and stewed vegetables quarter, 5min to boil, put the potatoes, cook another 5 min, put the eggplant, salt the, cook for 5 min, put the beans and the rest of the vegetable frying meat, cook 10 minutes, then salt the taste. Crush the garlic in a mortar, chop finely and put all the herbs into the finished soup, give it a brew before serving 15-20min.

As you can see, soup with pork can be very diverse, and every time it is possible to prepare a fresh look at the joy of home. Bon Appetite!