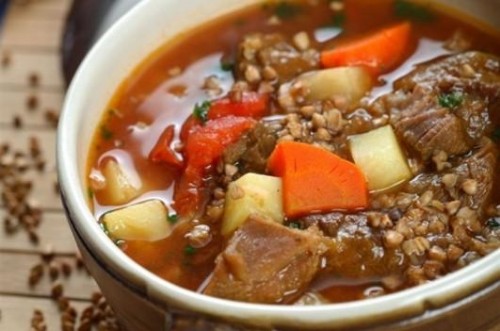 Today we talk about the recipes delicious soup of pork with cereals - buckwheat, rice, barley and others.

Pork and cereals - these are the products that regularly eat in our country for centuries, one of the most popular, popular and loved ones. Meat and cereals need to eat regularly to maintain the health and performance of the body. Food cereals very easily digested, saturating it with proteins, fiber, vitamins, minerals and carbohydrates. Such dishes, especially cooked meat, high-calorie and nutritious, so for people engaged in physical labor proposed in this article soup - just right for lunch or dinner on a weekday.

How to cook soup with pork and buckwheat. Meat on the bone cook concentrated broth. Throw in boiling broth previously lightly toasted on a dry frying pan buckwheat. Peel the potatoes and cut into cubes, chop the onion rings and fry it in butter with potatoes, then put into the soup and cook until soft cereals and potatoes. Ready to fill the soup with parsley and dill, bring to a boil and immediately turn off the stove. 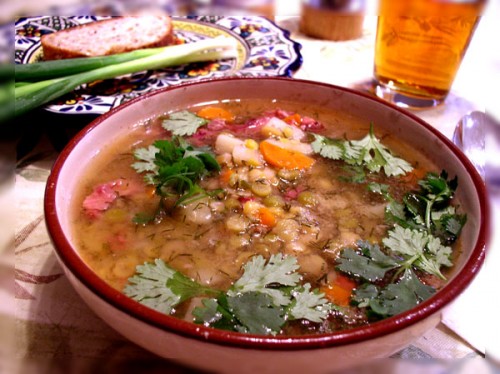 How to cook rice soup with pork. In vegetable oil in a frying pan fry the chopped garlic and put it on a paper towel. Bring the broth to a boil, put the rice, sliced celery, chopped onion and minced pork, boil for 15 min, stirring occasionally. Season with coriander soup, pepper, add the roasted garlic, then another 10 minutes on low heat and serve.

Soup recipe with pork and oatmeal

How to cook soup with pork and oatmeal. Pork - fillet or bone, cut into pieces and put in a pan, pour 2-2,5l water, put laurel, peppercorns,? bulbs, podsolit and boil until tender. Cut the potatoes into cubes, chop into cubes carrots, cut into julienne bell peppers, chop the remaining onion. Put the finished soup to meat carrots, potatoes, through 5min - pepper, then onions, roasted until browning on a mixture of vegetable oil and butter, boil the soup still 20-30min on low heat. For 5 min before end of cooking to put in the chopped parsley soup and oatmeal, turn off the heat, infuse the soup 10-15min, then serve.

How to cook soup with pork and millet. Pour into a saucepan 2.5L of water, put the meat, bring to a boil, remove the foam and cook on low heat until tender, to get the meat to cool, remove the bones and cut into portions. Wheat go, wash to clean water, cut the potatoes into cubes. Broth, bring to a boil, make small fire and put millet and potatoes, boil for 15-20min until they are ready. For frying grated on a coarse grater carrots and fry the chopped onion in butter, pepper, put in zazharku soup podsolit it boil for 5 min, turn off the stove, cover with a lid soup, leave for 20 minutes. Sliced bread cubes, salt, sprinkle with spices, and put in the oven at 220 degrees flushed. Pour the soup into bowls, put each on a piece of meat, sprinkle with crushed garlic, herbs and croutons.

Videoretsept soup of pork and beans