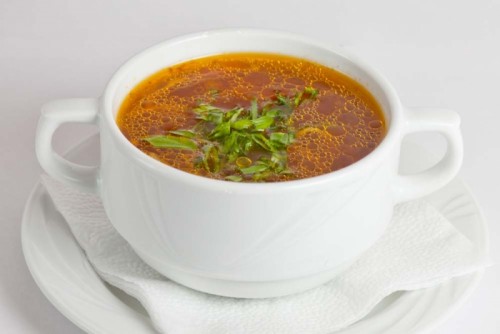 Soups, cooked with such meat as pork, get rich, aromatic and delicious. In this article we will talk about recipes for delicious soups with pork and vegetables, light and easy to prepare, perfect for the summer-autumn menu.

If you like hearty, rich meat soups - soups with pork it! Cooked with pork bones and meat broths are very nutritious, rich flavor that makes them a favorite among many meat eaters. If rich soup with meat you want, but don't want to be too high in calories, it is best to choose ways in which pork is combined with vegetables only.

Cooking soups from all parts of pork: ears, tongue, shank, brisket, sirloin, ribs, etc. it All depends on the recipe, and recipes soups with pork today, there are countless many cuisines of the world, each nation has its own peculiarities of cooking, so you just have to choose.

Today we will talk about the most simple cooking light soups pork with vegetables and cereals.

The first recipe: Soup with pork and pumpkin 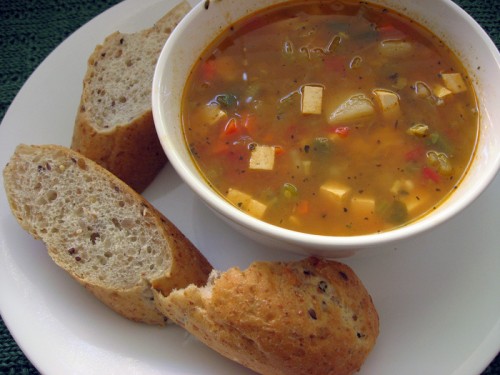 How to cook pork soup, and pumpkin. Rinse the brisket, chopped finely, cover with cold water, bring to boil, drain, re-fill with cold water and cook until tender over low heat. Pumpkin peel and chop into small pieces randomly. Add the pumpkin to the meat in the pan for 15 minutes before end of cooking pork, salt soup, season with pepper to taste, stir and serve.

The second recipe: pork Soup with mushrooms and spinach

How to cook soup with pork, spinach and mushrooms. Cubes and slice the meat, chop the mushrooms, RUB on a grater carrots, spinach finely chop, boil eggs hard-boiled and clean, green chop. In a pan, where it will boil the soup, put the butter, melt, put the carrots and mushrooms, fry until evaporation of the liquid, add the meat, put or immediately pour boiling water and cook for 20min. Next the soup add the spinach, salt, cook for another 5-10min. When applying in each bowl of soup to put on 2 mug boiled eggs, parsley and sour cream.

The third recipe: pork Soup with leeks and celery

How to cook soup with pork, celery and leek. Medium-sized pieces to cut the meat, pour a small amount of water, salt and boil until tender, then add the olive oil and simmer until the complete evaporation of the liquid. Separately, boil the chopped white part of leeks and grated celery in salted water until soft. Put the vegetables in the broth the meat, season with nutmeg, cook for another 5-min, remove from heat, add coconut milk and apply to the table, filled it with vinegar, pepper and salt.

If coconut milk is not, then you can replace it with cream or regular milk. The aroma of the coconut can give coconut.

The fourth recipe: Soup with pork and vegetables (Spanish cuisine) 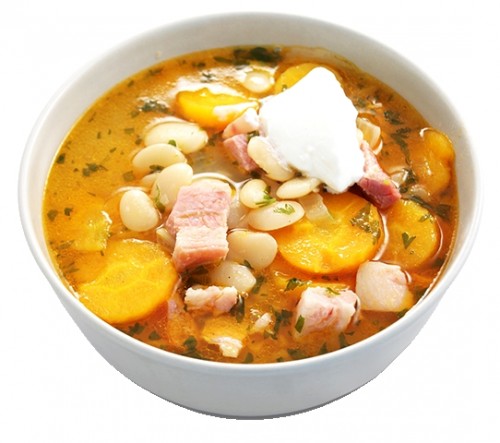 How to cook Spanish soup with pork and vegetables. Rings chop the onion, put in a pot together with a whole ham, pour water, bring to boil on low heat boil for 1.5 h until tender, filled for 15 min before the end of cooking Laurel. Ready ham to get and cut, removing the skin and excess fat, medium-sized pieces, broth, put in his back sliced meat. Season the soup with pepper, put the potato, cut it in cubes or cubes, under cover, boil until tender potatoes on a slow fire, then add to soup beans (liquid from the jar to drain), a julienne salad, pepper, salt and cook for another 10 minutes. Served Spanish soup with ham hot.

The last recipe, of course - not the easiest in terms of calories, but the meat for this soup not fried, and only brewed, making it compared to other soups, however, easier. Choose a recipe that has pleased you most of all, cook delicious soups and Bon appetit!

Another option is a light soup with pork, see the videoretsept.