Fennel: and yet dill or fennel?

recipes → Salads → Fennel: and yet dill or fennel? 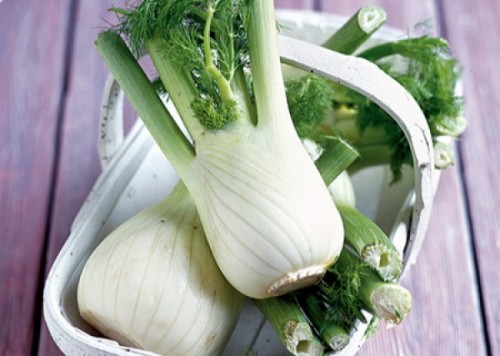 With such vegetables like fennel familiar not all, and not every second at least tried it, not to mention the preparation of various dishes. Nevertheless, the shelves of supermarkets are getting richer, and the menu ordinary Russian families there are those products that were previously used is not very popular. So get acquainted with fennel - vegetables, wonderful in every way.

There is a widespread belief that fennel - it's the same thing as dill, just another name, but in reality it is not so. Dill - a dill and fennel - a fennel, and it is not one and the same common between them is only the fact that they belong to the family Umbelliferae.

Fennel - a plant that is used in all parts of the food: big fleshy tubers (root), seeds and herbs. Today, there are two types of cultivated fennel - "vegetable" (with a fleshy stems) and the "ordinary", also called Voloshskaya dill or fennel pharmacy. It is believed that his homeland - this is Italy, where he began to cultivate from the wild species, but it was popular in ancient Rome and ancient Greece.

Since ancient times, fennel cultivated as a food and medicinal plants - in medicine it is used as a carminative, helping with urolithiasis and lung disease agent. Range of useful properties of this plant is very wide: it has a rejuvenating, healing, anti-inflammatory, sedative, antiviral, antibacterial, expectorant effect, improves the digestive tract, soothes the digestive system with such problems as flatulence and colic, lowers cholesterol, dilates blood vessels and heart mnogoe- much more. All this is due to its composition: fennel contains many vitamins (vitamins B 6, and A and C), nutrients such as iron, sodium, selenium, calcium, and many others

Soothing the digestive tract effect of this product (Fennel is widely known as a saving for infants medicinal product - it eliminates their flatulence and colic) due to the fact that the composition of fennel include prebiotic inulin.

Not only for children salutary fennel - in addition to his moms appreciate everyone lose weight, because it suppresses hunger and displays the body of excess fluid, activates the metabolism, reduces appetite and gently cleanses the body, adding that energy, that is valuable when a low-calorie diet, and as a whole. Through regular use of fennel, you can normalize the digestion of proteins, fats and sugars, and thus - to normalize body weight. So it makes sense to introduce this vegetable in the daily diet.

Contraindication to the use of fennel is only his idiosyncrasy, and not get involved in them to pregnant women suffering from diarrhea or epilepsy.

Fennel - a product of a wide culinary use. Its greens can be used for salads and canning, tubers - for stuffing, frying, baking and stewing, seeds - as a seasoning. This vegetable has a delicate, reminiscent of anise aroma and taste, which is appreciated by many connoisseurs and lovers of vegetables. With fennel can be prepared and soups, with which we will begin acquaintance with the recipes of this product.

How to cook soup with fennel. Chop onion, simmered it over medium heat in vegetable oil, chopped fennel tuber cubes, put in the onions and butter then 3-4min and season with nutmeg and pepper, mix well. Pour to the onions and fennel broth and water, add the sliced potatoes, and salt the under cover to put out 20 minutes until cooked potatoes. Pour peas, cook for another 5 min, add dill, under the cover let stand 5 min, then pyurirovat soup blender, 5min warm up, then pour into bowls and serve.

Another option tasty soup with fennel. 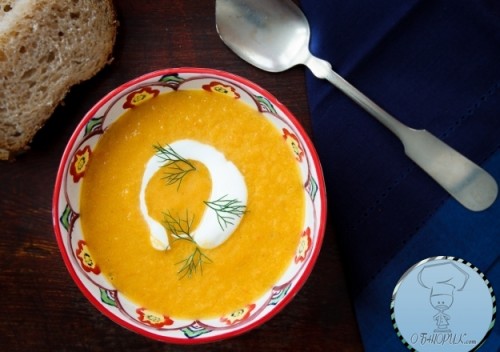 How to cook soup with fennel. All vegetables wash and dry on medium heat in a saucepan melt the butter, put the chopped celery, ginger, garlic, leeks, carrots and fennel, boil until tender vegetables. Pour over vegetables wine, bring to a boil, then pour in the broth and juice, bring to a boil again, put out under the cover to simmer for 10-15min, pour yogurt, pepper, salt and pyurirovat soup blender. When submitting decorate dill soup.

If the first dishes that can be prepared with fennel, a lot, the second list and did great. It is cooked with meat, fish - especially popular combination of fennel and white fish, stuffed it and them, bake, stew, etc.

How to bake a cheese fennel. Cut off the base of the root fennel, cut in the shape of a cone over white compared with the rest of the tuber core (like cabbage stalks), cut into slices about 5mm thick and place in a pan with melted butter, cook 5 min, pour the sour cream and cream, stir, shift the mixture into a baking dish, sprinkle with cheese and put in a preheated 200 degree oven, cook 30 minutes until browning.

The core of the fennel is cut so that it cooked quickly.

Even cooked fennel with cheese and other high-calorie food products are not too threatening figure, because in itself this tuber vegetable 100g contains only 31kkal! So what to do with it is very delicious diet meals. 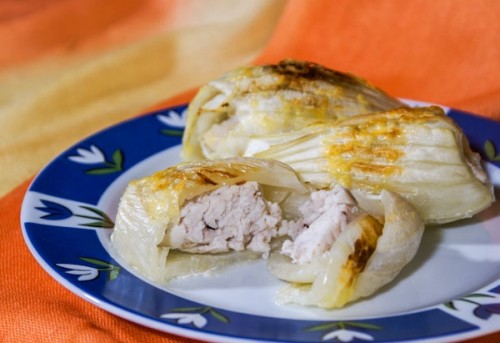 How to cook chicken stuffed with fennel. Finely chopped chicken breast, pepper and salt. Cut from the tubers of fennel on top of green stems, as well as the bottom of the bottom, disassemble the tubers on the plate (he will understand "scales" as onions). If the plate is too thick fennel, 5min to omit them in boiling water, then cool - they should curl. Put 1 tbsp minced chicken on each plate with fennel, twist roll. Lay out the resulting rolls in a baking dish, greased with butter, salt the, pour the cream, sprinkle with grated cheese and bake stuffed with fennel about half an hour in a preheated 200 degree oven.

Recipe for cooking pork with fennel

How to cook pork with fennel. Lightly beat off pieces of meat, cut greens with fennel tubers and tubers cut into large rings. Part of the