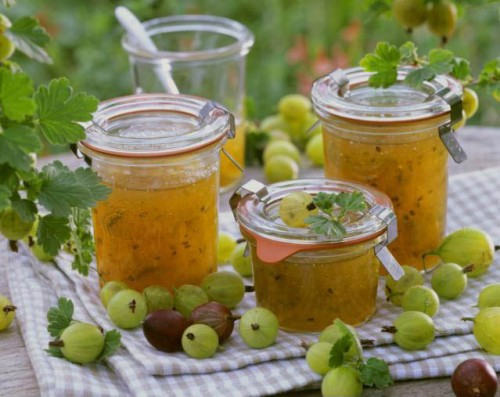 Gooseberries - another berry, is very popular in our country. And, like other kinds of berries - raspberries, strawberries, currants, etc., obtained from a wonderful jam, useful and very tasty. Let's see how to cook gooseberry jam.

Fat man, bristly grapes, prickly berry, berry goose - as they call gooseberries around the world. Well, its name in our country, this berry has received from the word "kryzhak" which, along with others such as Bersenyev used for its notation.

Because gooseberry - berry is very prolific, even if it grows in places with cool climate, in many countries of Northern Europe from it since ancient times made wine. Gooseberry drinking wine and Scandinavians, and the Vikings, and the Dutch and the Scots, and the inhabitants of the Baltic states.

Today gooseberry varieties, all kinds of which were derived from wild varieties of this fruit, there are about 2-3 thousand, and each of them is in demand among gardeners. Tasty, sweet-sour berry is used as fresh and as jams, jams, juices and compotes, jams but it has become the most popular form of bars of this wonderful berry.

Gooseberry jam, as well as berry fresh, useful in diseases of the digestive tract, heart, kidney, as well as obesity and anemia. In the off-season is a great tool for lifting immunity due to replenishment of vitamins (in gooseberry lot of vitamins A and C, ascorbic acid and biotin).

How to cook a gooseberry jam: recipes and secrets 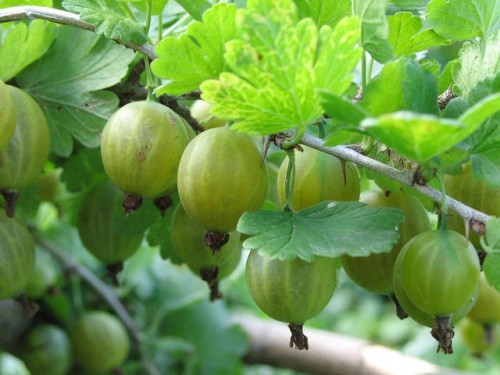 There just are not rewarded with laudatory epithets gooseberry jam - emerald, royal, regal, and all because it's kind of harvesting really beautiful and delicious. It is believed that this jam was one of the favorite delicacies of Catherine the Great! Today his cooking recipes, there are many, including those in which this berry combined with other berries, fruits, nuts, spices - just have to choose which of them to cook gooseberry jam, home to regale this wonderful dessert.

Boil gooseberry jam, as a rule, be of a slightly unripe berries, elastic and dense.

To begin with we give a very simple recipe for gooseberry jam.

Recipe of the classic gooseberry jam

How to cook the jam gooseberry. Rinse berries, each berry further need to release from the peduncle and tail, cutting off their gently, then pierce - so the berries is not cracked during cooking. Sprinkle prepared gooseberries vodka, remove for 20 minutes in the freezer, then rearranged in the refrigerator and leave overnight. From the sugar and water to cook the syrup, put in boiling syrup gooseberries, bring to a boil (stirring can not just shake), and immediately remove from heat. Let the mixture cool down when it has cooled, pour the syrup with berries through a colander, then bring to a boil again, put the berries and boil until boiling, then cool. In total cooking should be repeated 2-4 times. The last time the jam to half an hour (check the readiness to drop, which should not be spread after cooling). Arrange the hot sterilized jars for jam, cork.

If desired, you can add ready-made jam and vanilla.

For anyone who prefers to jam in as little as possible sugar, offer this recipe.

How to cook a gooseberry jam. Take very ripe and soft berries, wash and prepare, put in a pan, pour 1 cup of water, seethe, then rub through a sieve (seeds and peel shall not pass). Connect gooseberry puree with sugar, put on the fire, stirring constantly bring to a boil, boil for 15 minutes, jam, expanded in sterilized jars and cork.

If you combine gooseberries with cherry leaves and herbs, you get not only delicious but also very fragrant, fragrant jam.

How to cook the jam of orange gooseberry. Peeled and pitted oranges and prepared gooseberries chop blender or kink in a meat grinder, add sugar, stir and achieve its complete dissolution. Place the jam into sterilized jars and roll covers.

If desired, this jam can be added citric acid.

And, of course, speaking of gooseberry jam, we can not talk about the most famous recipes, which can be prepared in the very legendary "royal" jam this berry.

The recipe of preparation of the king (Emerald) gooseberry jam

How to cook a royal emerald or gooseberry jam. Take immature berries, cleaned of sepals and stalks, notched each berry, remove the seeds, put in a container, alternating with washed cherry leaves and pour cold water for 5-6 hours to leave, then drain. 2 glasses of water and sugar syrup boil, put in boiling syrup berries, let cool at least 4 hours. Next, again boil berries syrup, again let cool, then repeat. The finished jam pour into sterilized jars and cork.

Cherry leaves contribute to the preservation of green color of jam, as well as give it a distinctive flavor.

Today gooseberry jam rarely can be seen in the table, so having prepared it for the winter, you will be able to surprise many who come to visit for tea. This is - one of the undeservedly forgotten, probably because of the complexity of certain cooking kinds of jam, which turns out really fabulous taste and is very impressive with its emerald color, try it!