Soup for the interesting name chorba eat in Moldovans, Romanians, Bulgarians, Serbs, eat it in Turkey and Macedonia. What are its main features and how to make this interesting soup, read this article.

Incidentally, between shurpa and ciorba general - only the names of consonance. Each orthographic and phonetic distortion Turkish word Corba became an independent culinary dish associated with cuisines from around the world. Thus, chorba soup - it's not the same thing, that the eastern shourpa.

Chorba - a sour soup with poultry or meat, which includes a brew from wheat bran or ordinary kvass. The ratio of kvass and water should always be this: to 1 liter of water 0.5 liters of kvass. As a rule, the soup-ciorba includes products such as meat (beef, lamb, chicken or chicken giblets), vegetables such as celery, carrots, tomatoes, onions, parsley and spicy greens - tarragon, lovage, fennel, leeks. You can add to the soup is one of the additional ingredients - it can be cabbage, potatoes, beans, rice or sweet peppers.

If you want to cook this chorba, you'll need a special brew cooked on wheat bran. Make it not as difficult as it seems: to take pottery 4-6l capacity, to fill a quarter of wheat bran mixed with a handful of cornmeal, a little moisten their purchase ordinary or home kvass and fill up to the height? ware boiling water, mix well. Instead of wet bran kvass can be acidified chopped sprig of cherry, or left over from last kvass leaven. Capacity need to cover with a towel and leave for a day in the heat. Strain before serving. Refill brew can be half-quarter of the molded volume. If complicate the cooking process ciorba cooking wheat kvass not want to - take ordinary bread, will also delicious!

Preparation ciorba quite simple and comes down to the following steps:

In general, cooking ciorba - it is not very difficult, just need to want and to allocate time for this, but the dish turns out well, very interesting! It should be noted that variations of this soup in Serbian, Bulgarian, Romanian and other European cuisine, there are many, and recipes may vary considerably among themselves. We offer you the recipes of various interesting and tasty soup-ciorba options from which you can choose the best for your taste.

Kvass for ciorba separately boiled and poured into the soup for 5 min before it is ready. Vegetables in this soup are always placed only fresh, not fried - that this soup is fundamentally different from the similar filling soups.

A simple soup recipe-ciorba in Moldovan 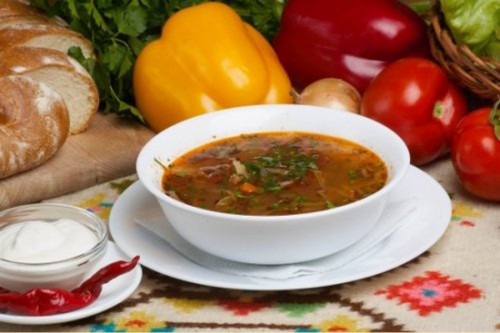 How to cook soup chorba in Moldovan. On the beef broth to cook, put the chopped straw roots and boil them for 10-15 minutes, add chopped into cubes potatoes, beans, tomatoes, shredded cabbage and cook until they are ready. Pour the soup boiled kvass, add greens, red pepper, salt, mix and allow to infuse the soup before serving. If desired acidified soup before serving with lemon juice, sour cream. 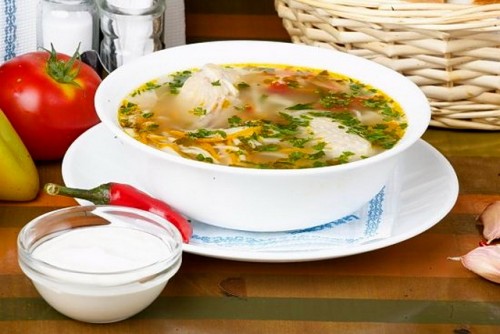 How to cook chorba in Romanian. Cook giblets from the broth, adding to them the laurel, peppercorn, 1 carrot, and onion, broth after boiling all of half an hour from the remaining onion and carrot in butter to make zazharku. All vegetables are chopped, add the broth first zazharku, then chopped vegetables, beans, boil to a simmer over low heat, pour brew or wine, to infuse the soup before serving.

But Serbian ciorba very similar to the eastern Shurpa - judge for yourself, and acidified with lemon juice instead of kvass.

Recipe ciorba in Serbian with lamb

How to cook soup chorba in Serbian. Wash the ribs, chopped, chopped onion, cut into julienne celery, carrots, scald tomatoes, peeled, cut into cubes. In Kazan, heat the oil, put 2-3 pieces of fatty ribs, onion, fry until rendering the fat, put the rest of the meat, fry until browning, add the celery and carrots, put up the evaporation of the liquid, stirring occasionally. Pour into the cauldron all the flour, stir and add the laurel and tomatoes, pepper and salt, pour water, bring to a boil. Reduce after boiling soup fire, boil it until tender meat. Stir sour cream and egg yolk, add lemon juice, after 10-15min after the end of cooking, add the soup mixture, stirring occasionally, to serve, sprinkle with abundant.

Try to cook soup chorba for dinner - it's very tasty and flavorful dish sure to be impressed by all those present at the table. And these wonderful dishes prepared according to the recipes of foreign cuisines - they always easy to surprise loved ones!