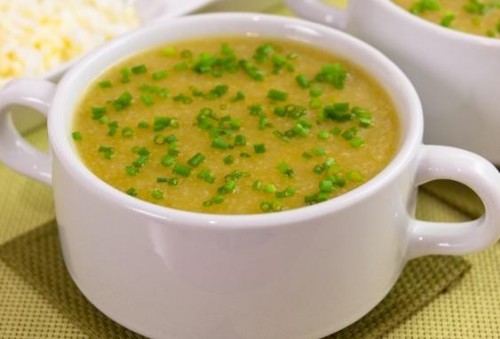 With zucchini can cook a variety of soups, including soups, add them to the various classic soups, etc. In this article we have compiled some interesting recipes soup with zucchini, on which you can prepare delicious first course for the whole family.

The more often you eat zucchini - the better, because this wonderful vegetable has a tremendous positive effect on the body. In diseases of the gastrointestinal tract, obesity, endocrine disorders (diabetes, etc..), Allergic reactions, this vegetable is highly recommended to eat as often as possible.

The only contraindication to use zucchini - renal failure.

Soups zucchini doubly useful, what can be said about any soups with those products which are often advised to eat doctors: it is useful and product-base (in our case - zucchini) and the soup itself as a first course. In general, we will not for a long time beating around the bush, tell you about the most delicious recipes soup with zucchini.

How to cook vegetable soup with zucchini. Bring to boil water, put the potatoes, cut it to the soup, bring to a boil and boil 12-15min. Cut into thin circles carrot, onion - half rings, and zucchini - not too large cubes can be as potatoes. The old tavern should be pre-cut peel and remove seeds. Fry onions in butter with carrots, then put the zucchini, cook 10 minutes. Peel the tomatoes, cut into medium-sized cubes, add to vegetables in skillet, put still 5min, then shift to the soup, bring it to a boil, boil for 5 min, podsolit put laurel and black pepper, chopped herbs and crushed garlic, again bring to boil and immediately turn off the stove. Infuse the soup before serving, covered for about 10 minutes, when applying sour cream mixed with mustard.

To the soup was more nourishing and flavorful, not cook it on the water, and on any soup - vegetable, chicken, beef.

How to cook soup with zucchini and porcini mushrooms. Cut the potatoes and zucchini cubes to 0.5 cm, cut into slices all the roots, saute in butter until soft, 2-3 minutes before the end of cooking add the chopped green onions. Prepare mushrooms: wash, cook, putting in cold water after boiling 5-10min, then cut and put in boiling broth or water and cook for 20-30min, put saute potatoes and cook for 15-20min, put for 5 min before end of cooking tomatoes and zucchini, salt the. Serve the soup with greens and sour cream.

For the base of the soup or broth may be used water, and water can be mixed with 200mL of milk.

How to cook soup with zucchini and feta. Clear zucchini, cut into cubes and fry with crushed garlic until soft, then mash with a fork or blender puree. Add the broth for soup spices, finely chopped mint leaves, zucchini and cook for 10 minutes, put the mashed feta and turn off the stove. Cool the soup and serve slightly warm or cold, garnished with mint greens with croutons, sour cream. 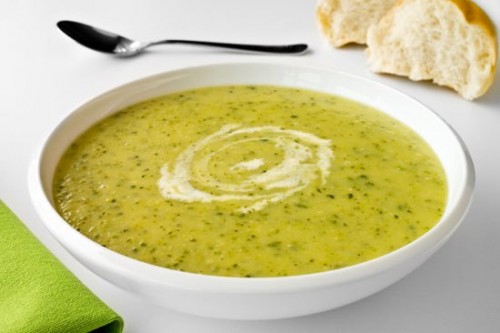 How to cook soup with zucchini and apple. Finely diced celery and carrots and fry for 5 min butter, put the squash and pour the hot broth, bring everything to a boil, salt the, cook for another 5 min at low heat. Apple cut into cubes, put in the soup, boil it 15 min. Next soup blender to grind and pour back into the pan, season with cream and bring to a boil, immediately turn off the heat and serve with croutons and herbs.