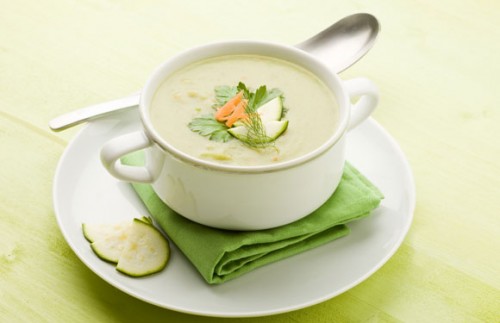 With zucchini can cook a variety of dishes, including a delicious, gentle and low-calorie soups. In this article we have compiled for you 4 simple recipe soups zucchini, which can be easily prepared each.

Massively cook soups in our country started not so long ago - even some few years ago, such dish is something distant hearts and stomachs of simple Russian man not to attend institutions of European cuisine several times a day. Simply put, the soups were something from the category of high-cuisine restaurant, which is not available to every second citizen of our country.

Today, with the advent of fashion for healthy nutrition soup puree popularized and mistresses, one by one, began to make sure that it is very tasty, healthy and not at all difficult to prepare a dish. And for soups, mashed squash, which today is dedicated to our attention, we can confidently say that they are also very useful, especially for those who suffer from diseases digestive tract, irritable bowel syndrome, obesity, losing weight and trying to saturate your diet useful food. Zucchini well digested, and soups, as it is known - is generally the best option dishes that need to eat more often, the better. It turns out that the soups with zucchini - very valuable dish that you should definitely learn how to cook and eat more often.

We offer a few very simple to prepare and delicious options soups zucchini.

Recipe One: Simple soup with zucchini

1 liter of vegetable broth or another or water, 2 cloves of garlic, 1 processed cheese and zucchini, 3st.l. bread crumbs, 2st.l. dill, and salt.

How to cook a simple soup of zucchini. Clear squash and remove seeds if he is young, you do not need. Cut the zucchini into large cubes, pour the broth, add chopped garlic slices, bring to a boil, put the finely diced cheese and crackers, soup boil to dissolve the cheese, then pyurirovat blender until smooth. If used for soup squash elderly, after the dissolution of cheese cook the soup even 10min. Sprinkle the soup before serving greens. 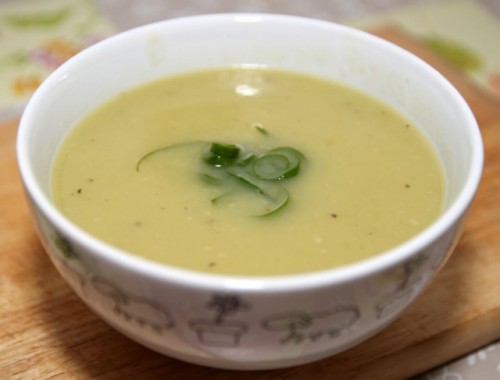 How to cook soup with zucchini and potatoes. Peel onions, carrots, potatoes and zucchini. Heat the oil in a pan and fry the garlic and onions, cut them. Add to the pan sliced medium-sized zucchini, potatoes and carrots, put 8min, stirring, pour in the broth, boil until cooked (soft) vegetables. Heat the cream (fat content higher than 20%). With vegetable broth drain, pyurirovat their blender, pour the hot cream and broth until desired consistency of soup, bring it almost to a boil, turn off the stove. Sprinkle soup with chopped croutons and serve.

How to cook soup with chicken and zucchini. Pour chicken 1 liter of water, salt the and bring to a boil, boil until cooked 15-20min. Arbitrarily cut zucchini, potatoes - diced onion - minced. Chicken broth to get, bring it to a boil, throw the potatoes, boil for 20 minutes, put the onion and zucchini and cook for 10-15min until tender zucchini. Pyurirovat blender contents of the pan, drain the liquid, then this liquid to dilute the soup to desired consistency. Include fire, put in soup cream cheese, stir, boil until it is completely dissolved in the soup, put in the chopped chicken soup, bring to the table, sprinkle with herbs.

Another option soup Cream of squash - in videoretsepte. Bon Appetite!