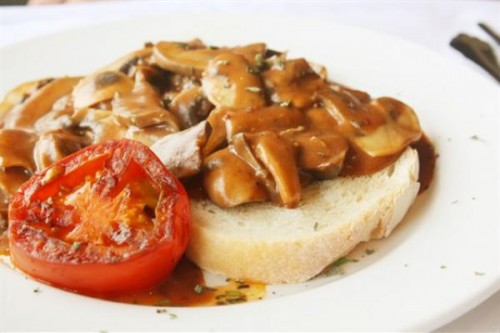 The fact that our country has long been called gravy, calling for the majority of people have heard this word salivation, in general, is nothing more than a sauce. Another name, but the essence is the same: gravy makes any dish is ten times better!

As the basis for the sauce, gravy basis may be meat and non-meat broth, cream, milk, flour, sour cream, vegetable oil and other products. Of course, in most cases, the description of this "food" is just some few minutes, which is why, when it comes to the main gravy - formulation, rather than process, which is usually very simple. In this collection we have compiled for you a few recipes most delicious sauces that can be used to enrich the flavor of different dishes depending on your own taste. 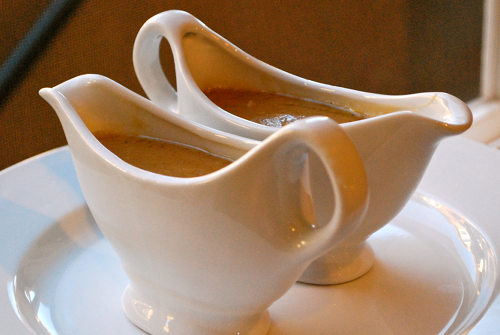 How to cook a simple universal gravy. Melt the butter in a frying pan, warm, and as soon as it will smoke, add the flour. How should prozhat it to browning, pour gradually the hot broth or water, stirring constantly, pepper and salt, season with gravy spices to taste.

This sauce can decorate taste a variety of dishes from pasta to steam fish, etc. The same can be said about the next - sour cream gravy.

How to cook sour cream gravy. Melt the butter in a pan, add the flour and fry it, then pour in vegetable broth, stirring constantly, and boil for 10 minutes gravy. Finely chop the onion and fry. In the hot sauce is thickened pour sour cream and put the onions, stir and remove from heat gravy.

Of the more popular options for less well-known: the next in line - garlic sauce, which is equally well to complement the taste of vegetables, fish and meat dishes, rabbit, birds.

How to cook garlic gravy (Czech cuisine). In a skillet melt the fat, pour the flour and fry, not zarumyanivaya it, add chopped garlic and onions, fry them until golden brown, pour the hot milk with constant stirring, add sugar, stir and boil for 20 minutes over low heat, stirring constantly all. Pour lemon juice at the end of cooking, salt the.

Gravy can be not only spicy but sweet, serve it in this case it is better to puddings, casseroles, vegetables or porridge.

How to cook sweet apple gravy. Clear apple from the skin, seeds, cut, cut into pieces, boil the peel in water, strain the broth, put the sugar, add the cinnamon, bring to a boil, boil. Flour to dissolve a small amount of cold water, stirring, pour in the gravy, again to give it a boil and remove from heat. 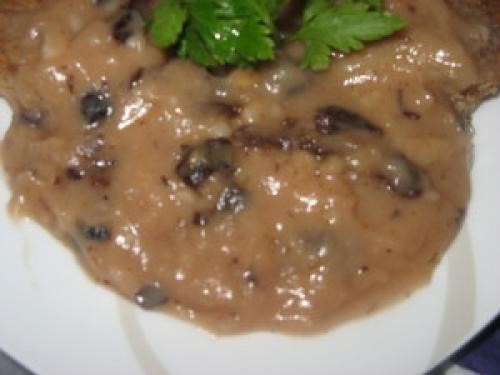 You will need: 1 onion and a glass of wine, 0.5 cups raisins, 3 tablespoons butter, 2 tablespoons flour, sugar and spices.

How to cook sweet and sour gravy with raisins. Fry the flour in the melted butter, a little water bring to a boil, add the chopped onion, spices (cloves and black pepper) and roots. Pour water and stir until flour medium thick mass. Add to the mix 2/3 tsp burnt sugar several times bring to a boil, strain the mixture, pour the wine, lemon juice (as much), add sugar - sauce should have a pleasant sweet-sour taste. Scald raisins and pour in the gravy, bring to a boil.

Some recipes gravies and does not provide cooking of food, as in the case of sauces.

How to cook lemon gravy with fresh herbs. Connect all the prepared ingredients, pepper and salt and mix well.

This sauce is suitable for any meat, vegetable or fish dishes, as well as salads.

How to cook ginger gravy. All the ingredients to prepare, combine and mix until smooth (you can - using a blender).

Served this sauce to the meat grill or barbecue, poultry or meat.

Any sauce enhances the flavor of a dish, amplifies it and rightly emphasizes, if it is properly cooked. Try or hone their culinary skills to the delight of the home!