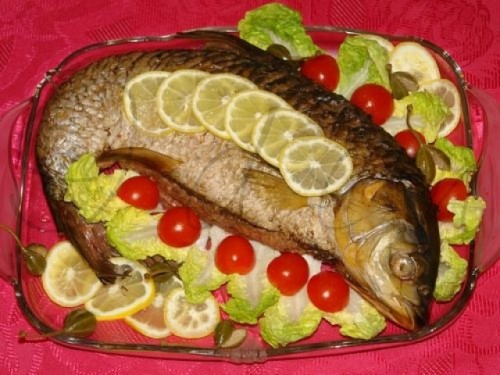 Who today is a holiday? And in honor of what then stuffed fish? Just like that? Wow! Get another surprise! For many gefilte fish is the dish only festive and you can view it on the table only on some special occasion. But we are not waiting for a special occasion, we have a feast every day. And today, as a main dish - stuffed fish.

Gefilte fish love to cook in Europe, probably because this dish is inexpensive, hearty, and it looks nice. And the Jews, gefilte fish has always been the main meal, which was served in a special festive days. In Israel, this dish is called "gefilte fish", and it can even be sweet (in this case, minced specifically add sugar).

Gefilte fish is better to be prepared from a large species of fish. Just one of those reasons that it is easier to stuff. Which recipe is the best and correct? Here is the answer to this question you will not find in any cookbook. Many recipes and they are all good and each can be modified by removing or adding certain ingredients.

Gefilte fish can be as original snack, or a full dish. Depending on how and what it is to submit. With stuffed fish almost any side dish will be: boiled potatoes, rice, vegetables, baked apples.

What kind of fish it is better to stuff? There is no need to invent something extraordinary and to run all the shops in search of rare varieties. The fit and pike-perch, pike and carp. Only it is important that the fish was fresh, not frozen. The frozen fish will burst the skin, which is not very good effect on her appearance.

If you are afraid to stuff a whole fish, it can be cut and stuffed separate pieces.
How to stuff the fish? To start the fish should be cleaned of scale, then beheaded. After that, remove the skin, capturing it from the hole that is left after the head, and extending toward the tail. It seems difficult? Training, training and only training! And you will succeed!
From the meat of the fish make the stuffing, cook the filling. Then the fish (more precisely, the skin from the fish) stuffed and put his head back. Now the fish can be put in the oven.

Here are the closest surprised, seems to be not a holiday, and on the table this dish!
Just don't forget to decorate your dish. Look, what beautiful pictures on the Internet, your fish can get no worse! Gefilte fish greens, make it patterns with the sauce, putting a curly cut pieces of vegetables and fruits.

Bon appetit! Just remember to take a picture of your dish before it disappears from the table! 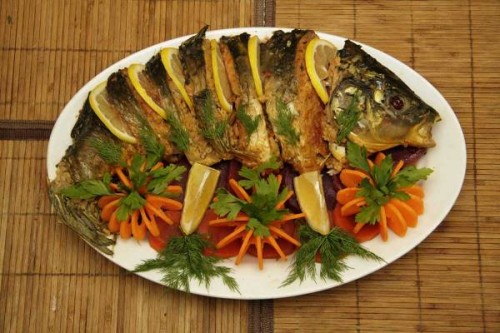 You will need: 1 kg of pike, perch or flounder 1 Cup of boiled mushrooms, 2 tablespoons margarine or butter, salt, lemon juice or vinegar, fish broth, 2-3 tablespoons of sour cream, bread crumbs.
Preparation:
The fish is cleaned, remove the entrails. With a sharp knife, make incisions in the fish flesh, to invest in them mushrooms, cut into strips. The fish inside and sprinkle with salt and drizzle with sour juice.
If the mushrooms stay, then they fill the fish. Then the fish put on a greased pan, put the pieces of butter and sprinkle with breadcrumbs.
Bake, occasionally pouring liquid, until the fish is ready.
On the table serve with boiled or fried potatoes and green salad or cucumber salad.
The sauce can be prepared from the liquid remaining in the pan after frying, add the sour cream, salt and sour juice.

You will need: 1 kg of fish, 0.5 kg of onions, 1 teaspoon salt minced fish and 1 teaspoon of salt in the water for cooking, 100 g of stale wheat bread or crackers, 1 pc. carrots, brew black tea or beets and 1.5 - 2 cups water, Bay leaf - on request, fresh herbs.
Preparation:
Clean the fish, remove the insides, to separate from the bones. Fish fillets grind in a meat grinder. Lightly fry the chopped onion and mince. Then mince soaked stale bread (crackers). Add minced salt and stir well.
Stuff the fish received meat. At the bottom of the pan for cooking to put fish bone, sliced layers of carrots, stuffed to the fish does not stick. On top put zafarshirovano fish. Separately, boil water with salt. And pour into the pan, but so that the boiling water does not hit directly on the skin of the fish, otherwise the skin will curdle.
For a good colors of stuffed fish, you can use either the brew black tea or sliced beets, which are added to the pan for cooking. If you decide to use tea instead of water the fish for cooking is filled with brewed black tea.
Leave to cook fish for 1.5 - 2.5 hours. When serving gefilte fish in Hebrew entirely laid out on a platter and decorated with greenery or mayonnaise. 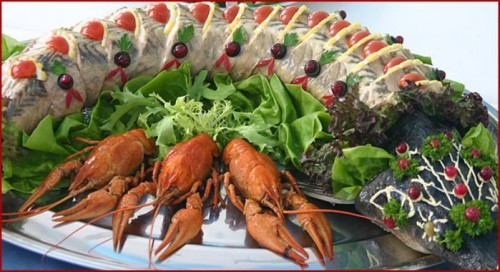 Preparation:
Clean whole fish, cut off the head around the fins, remove the entrails, without cutting the abdomen. The fish is thoroughly washed, wiped with a towel inside the abdomen, salt and fill buckwheat, mixed with fried onions and chopped boiled eggs. Top fish, sprinkle with pepper and roll in flour, fry in a pan with oil and place in the oven.
After 5-6 minutes, remove, pour the sour cream and again put in the oven for 5 minutes, basting spoons with the resulting sauce.
The duration of boiling depends on the temperature of the oven and the size of the fish.
Fish is best served on the table in the same pan or put on the dish with the juice.